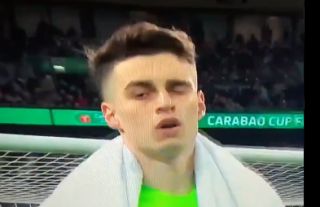 As if today’s drama between Kepa Arrizabalaga and Chelsea manager Maurizio Sarri wasn’t quite enough already, the goalkeeper winked at the camera at the full time whistle.

The Spaniard refused to be taken off against Manchester City in the Carabao Cup final, despite Sarri having already prepared substitute Willy Caballero.

It was an extraordinary incident of player power gone mad, and Kepa even had the audacity to show off about it with this little gesture towards the camera.

Have you ever seen anything like this, especially in a big cup final?