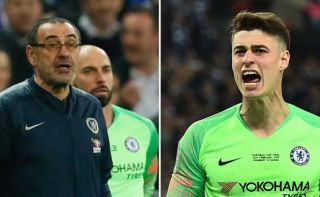 Chelsea manager Maurizio Sarri has explained that the whole incident with goalkeeper Kepa Arrizabalaga today was just a big misunderstanding.

While this sounds a little far-fetched from the Italian tactician following what looked like a big row between himself and the Spaniard, his reasons do sort of make sense.

Speaking about the incident after today’s Carabao Cup final defeat to Manchester City, Sarri explained that the reason Kepa refused to be substituted off was because he’d communicated to the Chelsea bench that he wasn’t injured, only for substitute goalkeeper Willy Caballero to be prepared anyway.

It’s then little surprise the 24-year-old did not seem at all keen to leave the Wembley pitch, though Sarri has suggested he was still annoyed with how his ‘keeper behaved, as he admits he was angry.

"I was really angry. I want to talk to him because he needs to understand we can get in trouble especially with you [the media]. I will explain the situation, without any other problem." Sarri says he wouldn't have brought Caballero on if he hadn't thought Kepa was injured. #CFC

Chelsea ended up losing on penalties to City, with Kepa not exactly covering himself in glory as he let a weak Sergio Aguero effort squirm beneath him.