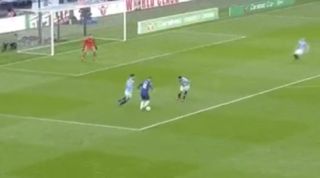 There may not be a goal yet in this season’s Carabao Cup final, but Chelsea star Eden Hazard produced a moment of real quality here.

Watch the video below as the Belgium international twisted and turned to put the Manchester City defence in knots in this great run forward.

Hazard has done well in a false nine role up front today, with Gonzalo Higuain dropping to the bench, and though it’s not thought to be his best position, he’s performed his duties well there.

This is perhaps the best we’ve seen from the 28-year-old, but can he now come up with a winner?

My god, what a player. pic.twitter.com/yMCRjBs4g1