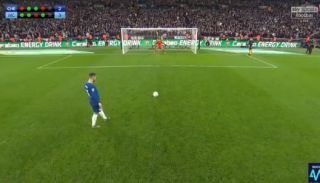 The Belgium international is undoubtedly one of the finest spot-kick takers in the world on his day, and this might also be up there with the best efforts he’s produced.

It is especially impressive considering the pressure of this situation, with Hazard needing to score at the time to keep Chelsea in the game.

Unfortunately it only delayed the inevitable as City scored next to lift the trophy, but what a strike this was…

Eden Hazard's penalty from this angle is pure class. This is filthy. pic.twitter.com/NUV47VA3Lr [SoccerAM]