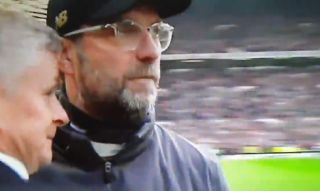 The Reds were far from at their best this afternoon, but did at least return to the top of the Premier League with that point.

It wasn’t a great spectacle, though, and it makes sense that Klopp would have expected better, particularly from his attacking players like Mohamed Salah, who was really quiet.

Here’s Klopp quite clearly appearing to say “Fucking hell, what a shit game” as he goes over to his opposite number Ole Gunnar Solskjaer after the final whistle.