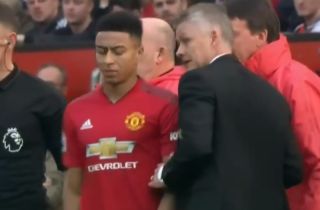 Manchester United have been dealt a huge double injury blow early on against Liverpool, with both Ander Herrera and Juan Mata having to go off injured.

Ole Gunnar Solskjaer has been forced into action, bringing on Andreas Pereira in midfield for Herrera, while he’s summoned Jesse Lingard off the bench to fill in for Mata.

Marcus Rashford has managed to stay on but also looked to be hobbling at points in this frenetic first half, which is bringing some committed challenges, even if the football hasn’t been that great so far.

United will be eager to win this game against Liverpool, who are in with their best chance of winning the Premier League title for a long time.

However, the Red Devils are in fine form going into this game so will be hoping to derail their rivals’ title challenge.

Losing Herrera and Mata won’t make that any easier, however, with Solskjaer already using up two of his subs just over half way through the first half.

Still, Pereira and Lingard are certainly not bad options to have for United as reserves.