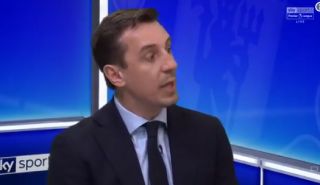 Manchester United legend Gary Neville has admitted he has one big worry over in-form midfielder Paul Pogba despite his rebirth under Ole Gunnar Solskjaer.

While the former England international explained his admiration for how Pogba is playing at the moment, he did question if it would end up being enough of a long-term thing.

Pogba has been slow to get going at Old Trafford, and Neville wants this to be the start of a long-term contribution to the club and not just a purple patch of form that leads his agent to start whispering in his hear about a possible transfer.

Is this overly negative from Neville just as Pogba starts to produce the kind of form that pundits like him have been calling for? Watch the video clip below and decide for yourselves…

"His agent will be into him and he'll be wanting his move away and his pay off." ?@GNev2 says Pogba is currently playing like the player @ManUtd thought they signed, but worries about the impact of the player's agent and his commitment. ?