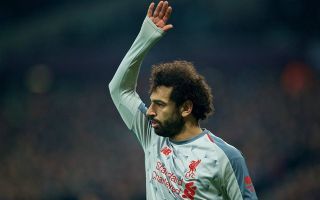 In a game dominated by a flurry of first half substitutions, one could quite feasibly ask why Mohamed Salah never came on at any point for Liverpool against Manchester United.

The Egypt international did manage to bag in that 3-0 win over Bournemouth, the only anomaly in this run, but it’s more than just the goals that have dried up from last season’s PFA Player of the Year and Golden Boot winner.

Perhaps unable to respond to the incredibly high standards he set in his first campaign at Anfield, Salah has rather shockingly failed to score in any of the following big games this season:

Having strengthened his defence so impressively with the signings of Virgil van Dijk and Alisson, Jurgen Klopp must be cursing this rotten luck in Salah’s turnaround in form.

Much has been made of the added title pressure at Anfield this season – with every game mattering that minute more, some of the freedom to their attacking play has clearly gone, with Salah perhaps the biggest victim.

Liverpool were really poor there, especially in the second half. Very little control in the middle of the pitch and just dreadful up top. Salah was essentially invisible.

Salah has offered nothing to our team since Christmas. Needs to score soon to gain confidence

Of course, the early injury to Roberto Firmino won’t have helped matters against United today, with Daniel Sturridge not contributing enough in his place, while Sadio Mane also had a quiet game.

But, according to stats from WhoScored, Salah finished with just one shot and one dribble in the whole game today. Additional stats from Statman Dave show that means he’s not registered a shot on target in either of his trips to Old Trafford. He’s also failed to score or assist in any of his four games against Man Utd. Almost more worryingly from watching him today, he just looks like a man sapped of all confidence in what he’s doing.

Mohamed Salah has failed to have a single shot on target in his last 2 games at Old Trafford.

Mohamed Salah has failed to score or assist in all of his 4 appearances against Manchester United.

It now has to be advantage Manchester City in the title race, which can perhaps relieve Liverpool of some pressure for the final months of the season, or at least allow them to focus on winning the Champions League that they were so unlucky to miss out on last year.

Salah’s lack of big-game impact, however, raises serious questions for the future – with Klopp in need of players not just of elite talent, but of elite mentality, to finally deliver that long-awaited league title.

Well that was a load of crap – what happened to Mane and Salah?? Missed opportunity indeed #LFC

What the fuck has happened to Mo Salah? #LFC

Liverpool should have won that game. Not convinced that they are title contenders.

Salah invisible in another big match.