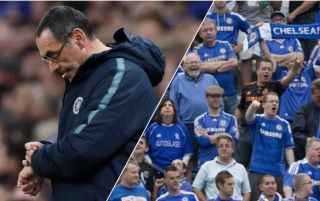 Chelsea have confirmed their team to face Manchester City in the League Cup final this afternoon, with one key tactical choice from Maurizio Sarri sending Blues fans into uproar.

The west London side take on Pep Guardiola’s men at Wembley this afternoon in the first major trophy final of the season, with City looking to retain the trophy having also won it last season.

Chelsea’s team for the match is very strong, with the likes of Eden Hazard, Jorginho, N’Golo Kante and David Luiz all handed starts by Sarri.

However, one decision that did not please Blues fans was the choice to play Hazard up front in what could very well be a ‘false nine’ role.

With both Olivier Giroud and Gonzalo Higuain on the bench, it seems baffling that Sarri will start his side’s biggest match of the season so far without a recognised striker on the pitch.

Following the conformation of their team news, Chelsea fans flocked to Twitter to express their anger at Sarri’s choice to play Hazard as a ‘false nine’.

We can understand where they’re coming from, to be fair…

Hahahahahaha no Alonso which is cool, but Hazard false 9 and BOTH Willian AND Pedro? Hudson-Odoi can’t get in over one of them? Fuck Sarri man.

Emerson but Hazard as false nine when we have 2 strikers??