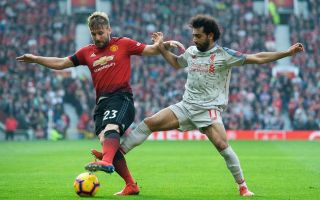 The Egypt international was close to invisible for the visitors, despite being one of the most exciting players on the planet last season as he scored 44 goals in all competitions to pick up the PFA Player of the Year and Golden Boot awards.

Today, however, he rarely looked like threatening for Liverpool, with United left-back Shaw keeping him very quiet on that side of the pitch.

The England international has been one of United’s most improved players this season and that will delight fans as they earned something of an unlikely point.

The Red Devils lost three players to injury before half time, while Nemanja Matic was also missing from the start of the game.

Still, Shaw played a key part in making sure Liverpool couldn’t take advantage, with the defender earning praise from Solskjaer for his job on Sala after the game:

Ole: “Scott McTominay was excellent. When they need a goal and they take Mohamed Salah off you know Luke Shaw has played a good game." #mufc [BBC]