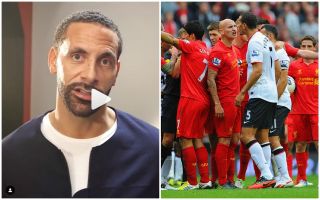 Manchester United legend Rio Ferdinand has sent a message to the United team on his Instagram page, the former Red Devil will be hoping to ignite the fire in the players.

Ferdinand was reminiscing about the goal he scored against Liverpool in October of 2006, the defender expertly brought down the ball before firing the ball into the back of the net in front of a roaring Stretford End.

Ferdinand accompanied his video message with a caption that will let the players know just how important today’s match is, Ferdinand expressed that “this game has everything riding on no matter how well either team is doing at the time” – this statement from the former England international hits the nail on the head.

United have been on a decline since Sir Alex Ferguson’s retirement and they finally look like a side made up of the traditional ‘United DNA’ under Ole Gunnar Solskjaer, so they’ll be hoping to show Liverpool that they are on their way back to the top.

Today’s clash feels like it is the biggest game of the season for both sides, United will be doing everything they can to dent Liverpool’s title hopes and the Reds will be hoping to show United that this is their time now.