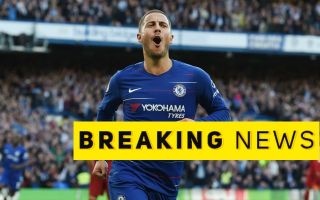 The Belgium international’s current Blues deal expires at the end of next season, and his future has been the subject of much speculation for some time.

Earlier this season, it was claimed Hazard has been offered a new big-money deal, which remains on the table, though the player was keen to wait to see what happened with Real Madrid, according to the Telegraph.

However, one big development since then has been Chelsea’s transfer ban, and Don Balon claim this has now complicated things for Real Madrid, with all signs indicating the 28-year-old will in fact commit his future to his current club instead.

It is not exactly clear why this change of heart may have come about, but it may be that Chelsea’s transfer ban has persuaded Hazard not to do anything that would put the west Londoners in a difficult situation whereby they could sell him but not replace him.

Eden Hazard to stay at Chelsea after all?

Cesc Fabregas’ recent quotes might back that up, as he recently cold Cadena Ser about a chat he had with Hazard over his future.

‘I think he’s going to extend his contract with Chelsea. He’s a loyal player. He told me he would never fight with Chelsea to leave. This is his club, he has won so much in England,’ Fabregas told Cadena Ser.

This is crucial news for CFC, who lost Thibaut Courtois to Real Madrid last summer and who would surely badly struggle to find anyone close to Hazard’s level for the kind of reduced fee they’d now face losing him for due to his contract situation.