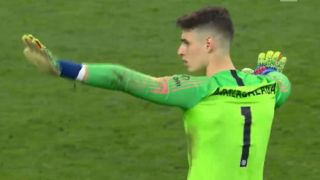 Chelsea goalkeeper Kepa Arrizabalaga has released a statement on social media in an attempt to clarify what happened during the League Cup final on Sunday.

The Blues eventually lost to Man City on penalties at Wembley, but the game didn’t pass without a major talking point as extra-time drew to a close.

SEE MORE: Video: Chelsea star has to hold Sarri back as he tries to confront Kepa before penalty shoot-out vs Man City

After initially struggling with cramp, Willy Caballero was ready to come on to replace Arrizabalaga, only for the Spaniard to ultimately refuse to come off.

That left Chelsea boss Maurizio Sarri incensed on the sidelines that his decision was essentially being ignored, as the Italian tactician was seen walking down the tunnel before turning back round while he was held back by Antonio Rudiger as discussions were taking place for the penalties.

After the game, he insisted that it was a breakdown in communication that was to blame for the issues, as Sarri claims he thought Arrizabalaga was injured and had to come off, but was only aware that he was fine after the team doctor came back to the bench later on.

That seems a little difficult to believe given he was still raging after the whistle was blown for the end of extra-time, but it appears as though Chelsea are putting on a united front to the media and fans at least, with Arrizabalaga releasing a statement of his own, as seen below.

The Spaniard stresses that he has “full respect for the coach and his authority” as he insists it was a misunderstanding over his ability to continue, but time will tell if further action is taken internally despite the best efforts of those concerned to avoid escalating the situation and risking a complete breakdown between the squad and the coach.

This certainly won’t be the last we hear about this as a player essentially refusing to come off is something that has simply never been seen before, regardless of these claims and explanations.