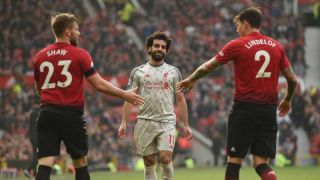 Man Utd defender Luke Shaw has revealed that the team held a pivotal talk during half-time in their showdown with Liverpool on Sunday.

The Red Devils were rocked with injury news before the game as Nemanja Matic was ruled out, and interim boss Ole Gunnar Solskjaer also lost Juan Mata, Ander Herrera and Jesse Lingard in the opening 45 minutes.

Naturally, that left them struggling to gain a foothold in the encounter and to impose their game on their rivals, but they remained defensively sound to stay in the encounter.

Shaw has revealed that they had a very frank talk during the break though, conceding that “everyone was going crazy”. Fortunately for them, whatever was said amongst the players and coaching staff, they improved in the second half and secured a share of the spoils.

“We were all very disappointed with how the first half went. We didn’t play well at all,” he is quoted as saying by the Evening Standard. “But we had a change of formation, we had a good chat at half-time. Everyone was going crazy.

“We said ‘relax and we just need to play our game’ and I think second half was better.

“We still weren’t at our best but overall I think we created the best chances and I feel we should have won.”

It’s a crucial point to keep the momentum going under Solskjaer, while United fans will undoubtedly be delighted with the fact that they held their bitter rivals to deal them a blow in the Premier League title race too.

Nevertheless, coupled with Arsenal’s win at the weekend, the Red Devils fell out of the top four in the table, and so Shaw, along with his Man Utd teammates, will hope that they can get back to winning ways and learn from their mistakes on Sunday when they face Crystal Palace in midweek.