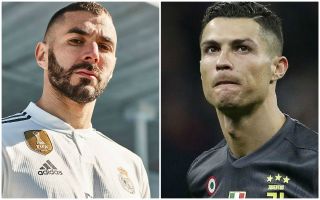 Real Madrid striker Karim Benzema has aimed something of a dig at his old team-mate, Juventus superstar Cristiano Ronaldo.

Speaking in an interview with France Football, the Los Blancos front-man attributed his improvement in form this season to no longer playing alongside Ronaldo up front.

It is well documented that Benzema had to play more of a supporting role in attack when Ronaldo was at the club, with the Portugal international the man who ended up scoring most of the team’s goals.

While this clearly worked pretty well for Madrid for a good many years, it is also unsurprising that Benzema himself might not have been content with such a role.

Speaking about it now, the Frenchman explains that he is now happier for being able to play his more natural game this season, becoming the main man up front for Real.

‘Before, there was a guy who put more than fifty goals per season and I was in the role of smuggler,’ he told France Football.

‘I played according to Cristiano. We formed a good duo. I was always looking for him with the goal of helping him to score even more goals.

‘Now, I’m the leader of the attack. It’s up to me to make a difference. I am very happy because I can play my real football.’

Overall, however, it’s hard to argue this has been much of a positive for Madrid, with Benzema not scoring the same kind of ridiculous figures Ronaldo would chalk up for the club, and the team generally weaker since his move to Juventus.