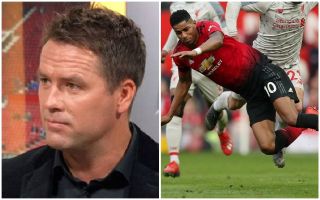 Michael Owen landed himself in hot water with Man Utd fans after a questionable comment during their clash with Liverpool on Sunday.

Ole Gunnar Solskjaer was given an injury nightmare in the first half at Old Trafford, with Juan Mata, Ander Herrera and Jesse Lingard all being forced off.

On top of that, Rashford also picked up an ankle knock, but played through the pain to finish the game and avoided leaving his side going down to 10 men.

However, Owen noted that the Liverpool players should have targeted the striker’s injured ankle, to then give themselves a numerical advantage to go on and potentially win the game.

On one hand, it’s not nice to hear players being encouraged to purposely injure another player, as it simply isn’t in the interests of fair play.

That in turn led to the angry reaction from many United fans below, who blasted their former striker for his comments.

Nevertheless, others will perhaps will insist that it’s simply being ruthless and finding a way to win. Unfortunately on this occasion, it was probably better if Owen didn’t come out with this horrible bit of advice…

Michael Owen: “If I was Jurgen Klopp in that dressing room at half-time with #mufc not being able to bring on another substitute, i’d be saying ‘right, first person, first opportunity, go and kick Rashford on the ankle he’s been limping on in the first half’.” #mulive [bein]

His career was almost over because of injuries at 25-26 and he has the nerve to say that about Rashford. Shameless.

Showing your class there Michael.

First of all, that’s absolutely sick. You’ll never be Jürgen. Moreover, the Liverpool players were doing that already so they didn’t need any reminding.

This is stupidness… No intelligence at all…

Absolutely no class in that statement whatsoever

That’s shameful. How can a former top player be so cynical & unsportsmanlike?