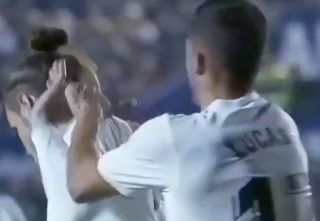 Gareth Bale bagged the winning goal in Real Madrid’s 2-1 victory over Levante on Sunday, but the Welshman wasn’t exactly over the moon about it.

As seen in the video below, Bale stepped up from the penalty spot in the 78th minute to put Los Blancos ahead, as they held on to secure all three points and close the gap on their rivals at the top of the La Liga table.

However, he shrugged off Lucas Vazquez’s attempts to celebrate with him and didn’t cut a particularly happy figure as he made his way back to the half-way line for kick-off.

Perhaps the obvious explanation is that Bale wasn’t happy with having to come off the bench at the weekend, while co-commentator Graham Hunter suggested that he was taking a leaf out of Cristiano Ronaldo’s book and displaying his frustration and unhappiness with the coach and the club.

Given the circumstances and the fact that it was the winning goal, it seems a little bizarre that Bale wasn’t prepared to celebrate given it was a key moment for him and his teammates at least.

What that says for his future at Real Madrid is unclear, as if he’s that unhappy with life at the Bernabeu, he could choose to pursue an exit this summer if the club don’t take the necessary steps to make him feel settled.

? @BumperGraham "It's the Cristiano Ronaldo mode of I'm not happy everybody please pay attention…" pic.twitter.com/1RUMMXLBWy