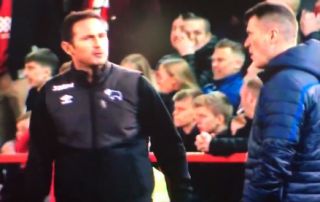 Derby boss Lampard was not happy with Forest assistant Keane, and appeared to go over and shout at him to grow a pair of balls.

These two remain a couple of the very finest midfielders to ever grace the Premier League, and it’s great to see them battling it out again as coaches.

Here’s the video clip, and some reaction on Twitter, with people unsurprisingly absolutely loving this…

Frank Lampard telling Roy Keane to “ get some fucking balls “ is the best thing you will see all day. pic.twitter.com/EoQBqc8gCb

Lampard actually told Roy Keane to get some f*cking balls. That takes balls from Frankie??? pic.twitter.com/iu7vlN3FfN

Roy Keane getting told by Frank Lampard to "get some fucking balls". Get him to Stamford Bridge whatever the cost #DCFC #CFC pic.twitter.com/PgbB5qfIa0

"Get some fucking balls" ??? pic.twitter.com/ruLonFwdaY