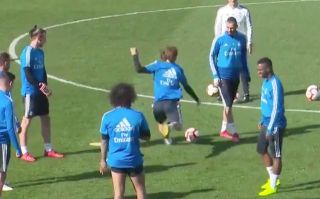 Gareth Bale may not have been in the mood to celebrate on Sunday night, but the Real Madrid superstar was in a better mood in training last week.

The Welshman scored the winning goal in his side’s 2-1 victory over Levante this past weekend, although he opted to snub celebrating with his teammates after his penalty went in.

However, as seen in the video below, he was busy winding up Luka Modric in training last week, with the Croatian stalwart seemingly losing his cool.

It’s rare to see the 33-year-old not be in control of his emotions, which arguably makes it all the more funny to see him smash the ball away as Bale chuckles to himself.

The pair go back a long way given they played alongside each other at Tottenham too, and so perhaps Bale knows how to push his buttons. Still, we’re sure the duo had a laugh about it later…

Modric pissed off at Bale is cute ? pic.twitter.com/KteAGomLgn

Video: Luka Modric rolls back the years with a fine finish to put Real Madrid 1-0 up against Granada