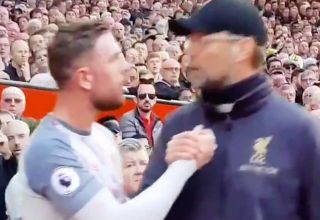 Liverpool played out a goalless draw against Man Utd at Old Trafford on Sunday, as they moved back to the top of the Premier League table with their point.

The Merseyside giants now sit just a point above title rivals Man City after 27 games, although their recent form may well be a concern.

Klopp’s side have been held to three draws in their last four league outings, and that in turn has allowed City to close the gap, while they were also busy winning their first trophy of the campaign on Sunday in the League Cup final.

However, there was a noticeable moment of tension during Liverpool’s clash with United, although it’s fair to say it was quickly addressed and resolved by Klopp.

As Jordan Henderson made his way off the pitch after being substituted in the second half, the Liverpool captain appeared to snub Klopp’s attempt at giving him a handshake as he instead clapped the travelling supporters.

Evidently, he was then called back by the German tactician, and as per the videos below, it’s suggested that Klopp wasn’t happy that Henderson didn’t shake his hand.

However, it appears as though the pair quickly moved on after resolving the matter, and they’ll hope to now regroup this week and get back to winning ways as soon as possible.

Bonus, where that happened??#MCICHE match, this happened between #Klopp and #Henderson in the #LiVSOU match pic.twitter.com/tgAQ46ZCKK Iam sure this will be an afterthought on the day all considering. Showing respect for others, teammates etc, can never be underrated to #Success

Hmm Klopp not happy with Henderson here “you didn’t shake my hand” pic.twitter.com/TBJ8wYf7rX