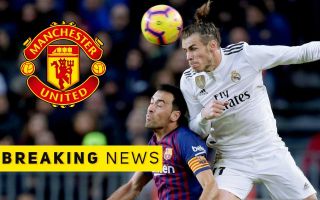 Manchester United have reportedly been cleared to seal the transfer of Real Madrid winger Gareth Bale for just £77million.

The Wales international has been strongly linked with the Red Devils before, with Diario Gol stating they’d made an offer for the player and that Old Trafford was his preferred destination.

Bale is now available for £77m as another Diario Gol report states Real Madrid are actively looking to get rid of him and seem to be lowering their demands.

However, they also add that the 29-year-old is struggling to attract serious suitors at that price given his dip in form in recent times.

Still, that contradicts what they previously stated about United’s interest, so it seems likely this long-running transfer saga could finally come to an end.

Bale has been linked with MUFC for many years since leaving Tottenham in 2013, when they tried to get him before he moved to the Bernabeu.

Gareth Bale to Manchester United transfer looks on the cards

It remains to be seen if some deal can be agreed now, but Madrid seem, for their part, to have given United permission to complete this deal for a pretty reasonable fee.

Despite his dip in form, Bale remains a potentially world class attacker and surely an upgrade on the struggling Alexis Sanchez.