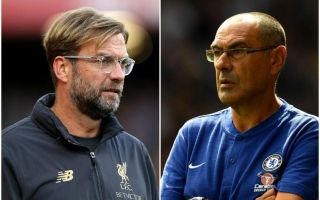 Liverpool are reportedly the latest club to be linked with an interest in the transfer of Eintracht Frankfurt striker and Chelsea target Luka Jovic.

The 21-year-old is making quite a name for himself this season, having scored 21 goals in 31 games in all competitions for his current club.

MORE: Liverpool and Chelsea in battle over bargain £25million transfer

Goal recently linked Jovic as a top target for Chelsea, while Barcelona were also credited with an interest, though Don Balon suggested his £52million asking price had put them off.

In a fresh twist from Don Balon, it’s suggested Barca remain the favourites for Jovic due to him rejecting so many other offers from big clubs, among those Liverpool.

The Reds are listed as among the big names to make an approach for him, but it seems the Serbian has his heart set on a move to the Nou Camp.

It remains to be seen how this will pan out, but one hopes there is still a chance this top talent will end up in the Premier League.

Chelsea certainly need a new striker after a flurry of flop signings up front in recent times, with even Gonzalo Higuain struggling to make much of an impact since his loan move from Juventus in January, meaning there’s every chance he won’t end up joining the Blues permanently.

Liverpool, meanwhile, could do with more options to rotate up top, as the likes of Daniel Sturridge and Divock Origi aren’t much competition for Roberto Firmino in the centre-forward role.