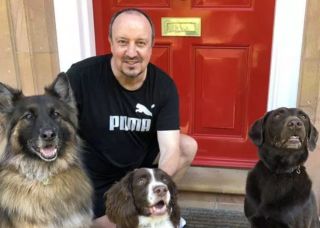 Newcastle United manager Rafael Benitez has revealed he’s had to try to teach his dogs how to speak Spanish as they don’t understand his English.

The Magpies boss got his three dogs last year, introducing them on his Instagram account, perhaps in an attempt to be the managerial version of Alexis Sanchez, who gave his dogs Atom and Humber their own page.

MORE: Video: People are freaking out about this clip of Neymar and his Mum

Benitez, however, admits he struggles to communicate with his pets, and has tried to speak to them in both English and Spanish without much luck so far.

‘I try to speak to my dogs in a number of languages, but with no joy,’ he is quoted in the Sun.

‘I’ve tried in both Spanish and English language, but they just don’t understand me! I am still training them.’