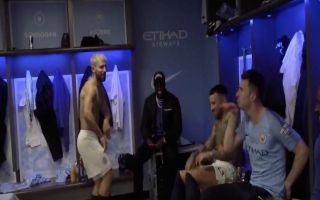 Pep Guardiola’s side won the final on penalties after a goalless 120 minutes of action at Wembley, picking up their first trophy of the season as they continue their pursuit of an unprecedented quadruple.

There was jubilant scenes in the Man City dressing room after the game and with music blaring and all of the players fooling around celebrating, Laporte decided to try out a bizarre dancing routine which raised more than a few eyebrows among the squad.

The Frenchman can be seen doing some kind of ‘duck dance’ sitting down, while Sergio Aguero is also prancing around the dressing room, with neither man actually managing to keep in time with the beat.

Check out the hilarious video of Laporte and Aguero below, via Twitter.