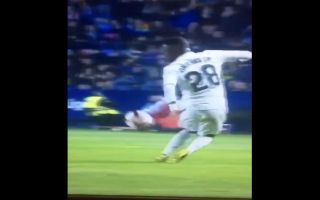 Real Madrid attacker Vinicius Jr produced an exceptional moment of skill during a 2-1 La Liga victory away at Levante on Sunday.

Los Blancos claimed a hard-fought win thanks to goals from Karim Benzema and Gareth Bale, which saw them move back within nine points of league leaders Barcelona.

Vinicius Jr was once again granted a starting berth on the left of a front three alongside Benzema and Lucas Vazquez, having enjoyed a superb breakout season at the Santiago Bernabeu over the last few months.

The Brazilian produced a typically energetic performance and even had the audacity to showboat when receiving an aerial pass, showing off his outrageous first touch with an amazing ‘Rabona’ to control the ball stone dead.

Check out Vinicius Jr’s superb skill below, via Twitter.