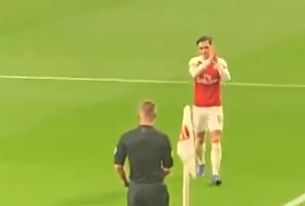 Mesut Ozil may not have played much for Arsenal this season, but he made sure to show the club’s fans he’s still committed with a little tap of the badge during today’s win over Bournemouth.

The German playmaker was brought back in today by manager Unai Emery and certainly shone in a one-sided victory at the Emirates Stadium.

Still, Arsenal fans will also have loved this little moment off the ball as he paid tribute to the crowd with a clap and a tap of the club crest on his shirt.

Whatever Emery is trying to do with Ozil, it’s clear he’s still hugely popular with Arsenal’s fans…

Video: Mesut Özil applauds the Arsenal fans & taps the badge as he makes his way to take a corner during tonight’s win over Bournemouth. [@wozthegooner] #afc pic.twitter.com/t6oCb4Ka58