Whoever’s running Chelsea’s official Twitter account seems to have forgotten the club are most likely going to be slapped with a transfer ban this summer.

The Blues have been punished over their recruitment of some young players, though BBC Sport have reported they are set to contest the decision, potentially buying them some time and an opportunity to sign players this summer.

Still, it looks a bit silly for Chelsea to be promoting transfer rumours and gossip involving their club at a time when it still remains to be seen if they will actually be making any this summer.

Here’s a screen grab of the tweet they put out this afternoon, which has, it’s fair to say, been mocked pretty mercilessly by fans on Twitter. 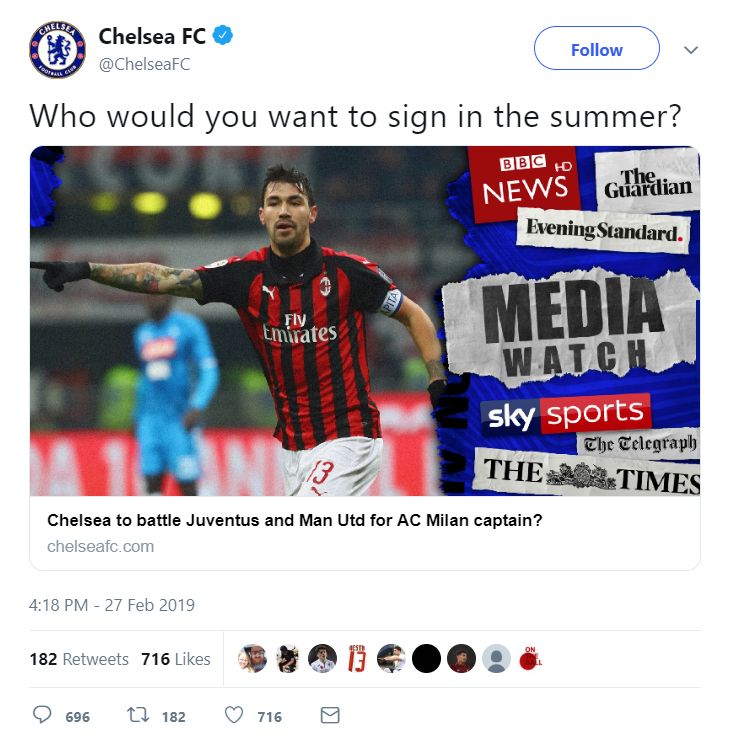 Here’s a collection of some tweets doing the rounds trolling Chelsea’s Twitter account for this rather embarrassing oversight, with their social media work almost as error-prone as their defending was at the Etihad Stadium recently…

Do you want to tell them or shall I? ? https://t.co/MEAboNJfSq

Smh. This is out of control.

Friday: FIFA bans Chelsea from making any signings this summer or the January transfer window.

Today: Chelsea tweets "Who would you want to sign in the summer?"

That could happen if the appeal process puts the ban on hold https://t.co/mPo1Om8tqt

???? When you've got a transfer ban but the social media guy just doesn't give a sh*t… https://t.co/H9pgcqDG5M

Who wants to tell them? ? https://t.co/YI4ahaZKqA