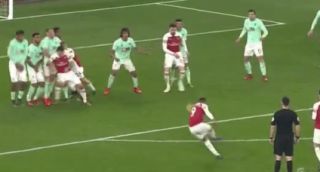 Alexandre Lacazette added a quality free-kick for Arsenal to make it 5-1 in their Premier League clash against Bournemouth tonight.

The France international had to come off the bench to get in on the act for the Gunners, but certainly made his presence felt by making a fine impression on this team once again.

An underrated talent, Lacazette took time to get going in English football after joining Arsenal from Lyon last season, but this is what he’s all about.

Is this Lacazette’s best strike in red and white?

What a hit. My Striker. pic.twitter.com/JM3oKbY4Mb