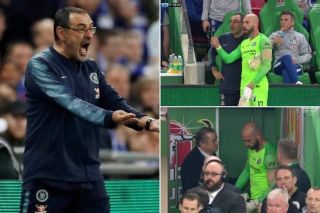 Chelsea boss Maurizio Sarri has dropped goalkeeper Kepa Arrizabalaga for tonight’s clash vs Tottenham, the Spaniard caused controversy with his antics in the Carabao Cup final.

The Blues are currently sitting in sixth place and they need a win tonight against third placed Spurs if they are to stay in the race to finish in the top four and secure their qualification for the Champions League next season.

There are four changes for Sarri’s side tonight, fans will be focused on the fact that Willy Caballero comes into the side after Kepa’s antics on the weekend.

Other changes include left-back Marcos Alonso coming into the team for Emerson, Mateo Kovacic entering the fray in the place of Ross Barkley. January loan signing Gonzalo Higuain has been called into action in the place of Willian.

Higuain will be looking to notch himself a goal tonight and prove that he’s one of the best strikers in the world. Higuain will certainly have one eye on what Harry Kane is up to on the other end of the pitch.

Check out Chelsea’s lineup below:

The team news is in! ?#CHETOT pic.twitter.com/ZK4RDUk2LX

Check out some reaction to the team news:

Ffs Willy is no where near as good playing out from the back. Kepa is a huge part of our system. He should of started Kepa and subbed him off with 2 minutes to go.

Hope this doesn’t cost us. Caballero’s distribution is dreadful

Signs of weakness for me, he handled it so well after the game saying it was a misunderstanding & dealing with it behind closed doors, if it’s dealt with then this action is unnecessary in my opinion #CFC

Cutting your nose off to spite our face …. pathetic….