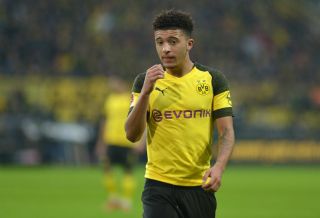 Man City face the threat of an FA investigation over claims that they paid £200,000 to the agent of Jadon Sancho when he joined them at just 14.

The 18-year-old has since left the Etihad to move to Borussia Dortmund, and he has been in sensational form so far this season with nine goals and 14 assists in 31 appearances for the Bundesliga giants.

However, City might be in hot water over the deal to sign him in the first place, with The Sun reporting that the FA are looking into allegations made that they paid £200,000 to agent Emeka Obasi, in addition to the fee paid to Watford to snap him up.

It’s added that it could be considered a breach of rules relating to payments to minors, and so now the FA could take action depending on their findings.

In turn, it could be a double blow for City to not only have seen Sancho flourish elsewhere after struggling to make a breakthrough in Manchester, but they may also now face disciplinary action if their actions in signing him were deemed to break regulations.

Chelsea were handed a transfer ban for two windows last week for a similar offence, and so Pep Guardiola will undoubtedly be hoping that Man City don’t suffer a similar fate.