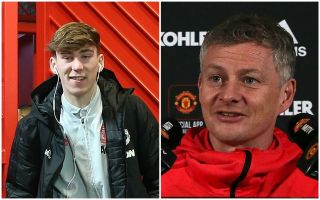 The 17-year-old midfielder looks a hugely promising talent for the Red Devils, having already worked his way into Solskjaer’s first-team plans despite being so young and inexperienced.

It remains to be seen if we’ll realistically see much more of him this season due to his opportunity tonight following a large number of injuries for Man Utd.

Still, Solskjaer believes the teenager has a big future, comparing Garner to club legend Michael Carrick in his playing style, as quoted by Kris Voakes below:

Ole on Jimmy Garner; "I believe he's got a chance to have a great future. He knows we believe in him. We've got faith in him being the next Michael Carrick. He plays simple passes, plays through the lines." #MUFC

Given that Carrick was one of United’s best and most important players for a long time, that’s potentially a lot of pressure on Garner’s young shoulders.

United fans, however, will just be thrilled to see another homegrown talent coming through, with MUFC having a proud record of promoting from their academy to great success, particularly in the Sir Alex Ferguson era when some of the club’s best teams were built around the likes of Ryan Giggs and Paul Scholes.

"He has been running…A lot!"

Romelu Lukaku has earned his return to form for #MUFC