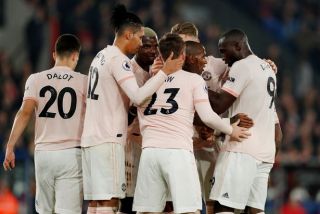 Manchester United won yet again against Crystal Palace, winning 3-1 at Selhurst Park in their Premier League clash on Wednesday evening.

Goals from Romelu Lukaku and Ashley Young did the job for the Red Devils, who continue to look pretty much unbeatable under interim manager Ole Gunnar Solskjaer.

The Norwegian tactician was without a number of first-team players through injury today, but still mustered up a good win against a side Man Utd historically like playing against.

Remarkably, according to the below tweet from the Sportsman, this is now the 20th time these two sides have played in the Premier League without Palace registering a single victory.

? ? Crystal Palace against Man Utd in the Premier League…

A competition record for most matches vs a single opponent without ever winning…#CRYMUN pic.twitter.com/tnzOsEVbsZ

This is the worst run for any side playing in the division, though it doesn’t make United’s current form any less impressive.

Despite the games coming thick and fast, they really seem to be going places under Solskjaer, who is putting them in a strong position to grab that final Champions League spot by the end of the season.