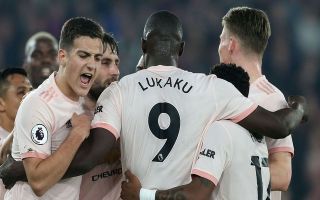 The 25-year-old moved into the top 20 of the Premier League’s all-time leading goal-scorers after scoring his 110th and 111th goals in England’s top flight at Selhurst Park tonight.

Despite all the criticism that Lukaku receives, he’s already established himself as one of the best foreign strikers at least to grace the Premier League – there are only seven non-English players that are ahead of the Belgian ace.

Lukaku will be hoping tonight’s performance gets his season back on track so that he can close the ground on his rivals, at just 25 years old, there’s every chance that Lukaku could end up in the top 10 before he hangs up his boots.

Take a look at Lukaku’s first here and his second here.

The impressive stat was revealed by journalist Kristof Terreur:

Romelu Lukaku has entered the top 20 of all time top scorers in the Premier League with 111 goals. #mufc pic.twitter.com/J0jZ0og8IS