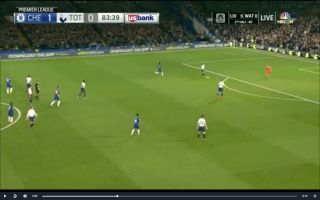 Kieran Trippier had a horror moment in the 84th minute of Chelsea vs Tottenham, the England international lost his head and scored an embarrassing own goal.

Trippier picked up the ball just outside the box and in a momentary lapse of concentration the right-back decided to pass the ball back towards Hugo Lloris – who was already rushing forward to collect the ball.

What ensued was Trippier’s pass-back being tucked perfectly into the bottom corner of the goal and Chelsea were gifted a two-goal lead.

Here’ another look at the horrific own goal:

This Trippier own-goal is absolutely class!!??
He dodged Lloris so nicely? pic.twitter.com/MwgNBWOLst