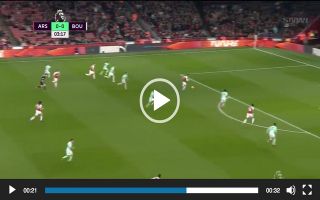 Arsenal playmaker Mesut Ozil has opened the scoring for the Gunners, just three minutes into their clash vs Bournemouth this evening. Take a look at the goal.

Ozil was played through on goal by left-back Sead Kolasinac, the retired Germany international then pulled off his trademark finish, which was tipped into the back of the net by Asmir Begovic.

This is Ozil’s first league start for the Gunners in a month.

Ozil’s goal this evening is his first in over four months. The World Cup winner last scored in Arsenal’s 3-1 win over Leicester way back in October.

Ozil with his trademark finish ..

Ozil was on quite the drought before tonight’s goal involvement:

Mesut Özil has been directly involved in a Premier League goal for the first time in 2019.

He's ended his 441-minute drought without a goal or assist. ? pic.twitter.com/Xefu58tcWI

The Gunners have got off to a flying start vs the Cherries.