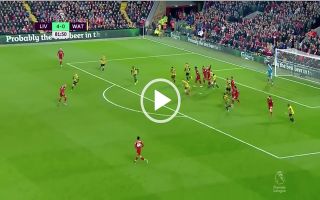 Less than three minutes after making it 4-0 to Liverpool, Virgil van Dijk bagged himself a brace by scoring a towering header to make it 5-0 to the Reds.

In the 82nd minute of the tie, Liverpool had Watford’s backs up against the wall and midfield general Fabinho teed the ball up to Andrew Robertson who delivered an inch-perfect cross into the box.

Van Dijk towered above Craig Cathcart to nod the ball into the back of the net. Liverpool had some unusual heroes to thank for their win tonight; a hat-trick of assists from Trent Alexander-Arnold, a brace from Virgil van Dijk, a superb solo goal from Divock Origi and a brace from Sadio Mane made up a perfect performance.

Liverpool were devastating tonight and this is just the kind of performance that fans have been waiting for, the Reds have made the statement that they aren’t slowing down in the race for the title.