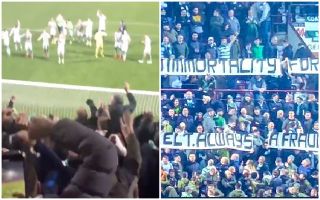 Brendan Rodgers was officially appointed the new Leicester City boss this week, and his exit from Celtic clearly hasn’t gone down well.

Aside from the banner below being displayed by Celtic fans during their clash with Hearts, there was also a cheeky dig from Supporter Liaison Officer John Paul Taylor.

As seen below, a video was uploaded on the Twitter account, suggesting that the atmosphere created by the Celtic fans won’t be found elsewhere.

While it may have been an innocent tweet, the timing and sentiment of it would suggest that it was more than that and it is perhaps a pop at Rodgers.

Having won everything on offer at Celtic, the challenge of returning to the Premier League to take Leicester forward was evidently too appealing to turn down for the former Liverpool manager.

Whether it turns out to be the right decision for his career remains to be seen, but evidently he’s not particularly popular among the Celtic faithful right now…

What a feeling, you can’t beat it and you’ll never get it anywhere else ? pic.twitter.com/NCrFeYflMw