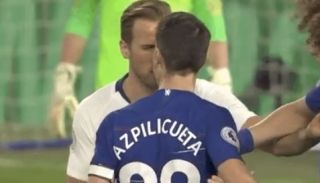 Tottenham striker Harry Kane could reportedly be at risk of facing a three-game ban after his altercation with Cesar Azpilicueta on Wednesday night.

The incident occurred in the first half of Chelsea’s 2-0 win at Stamford Bridge, with Kane getting involved with the Blues captain and appearing to push his head into that of the Spaniard’s.

Referee Andre Marriner took no action, and so if retrospective action is now taken, as suggested by The Sun, then it could lead to the Spurs forward facing a possible three-game ban.

If that were to be the case, then he would potentially miss this Saturday’s north London Derby against Arsenal, in what would be a massive blow for Tottenham and boss Mauricio Pochettino.

Kane has been fundamental for Spurs again so far this season, scoring 21 goals in 33 games. Losing their 25-year-old talisman would be a major setback ahead of such a crunch showdown.

A win for Arsenal would move them to within just a point of their rivals, while allowing the others to close the gap too in the battle for a top-four finish in the Premier League this season.

With that pressure building, the last thing Tottenham need is for Kane to now be banned, but he has seemingly run the risk with his actions on Wednesday.

It’s added that an FA panel will now look into the matter closely and make a decision ahead of the weekend, meaning that Kane and Spurs appear set to face a rather anxious wait for news on whether or not he’s available to face the Gunners.