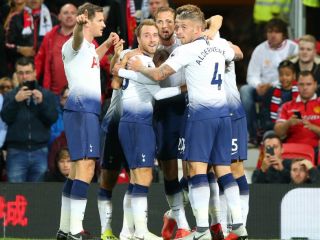 Tottenham can breath a huge sigh of relief as it has been confirmed that Harry Kane will not face any retrospective action after an incident with Cesar Azpilicueta.

The 25-year-old appeared to instigate a clash of heads with the Chelsea captain during the 2-0 defeat at Stamford Bridge on Wednesday night, which referee Andre Marriner didn’t take any action over.

However, as per BBC Sport, crucially the incident was seen by the officials and so that rules out any punishment being handed down by the FA as the referee opted not to do anything during the game.

It’s arguably a fortunate escape for Kane as it did appear as though he risked picking up a caution at the very least at the time, but now with no threat of a suspension looming over him, as suggested by The Sun, he’s free to now feature against Arsenal in the north London Derby on Saturday.

That will be a massive boost for Mauricio Pochettino given his talisman’s ongoing impact again this season, with Kane scoring 21 goals in 33 games.

His absence through injury hurt Tottenham earlier this season, and so having him available at a crucial time in the campaign will be fundamental to their chances of achieving their objectives.

Things are undoubtedly tight in the race for the top four this season, as a win for Arsenal at the weekend could move them to within a point of their rivals.

Further, a resurgent Man Utd have made up plenty of ground, while Chelsea remain a threat too regardless of Maurizio Sarri’s woes in recent weeks.

In turn, Saturday’s game could be crucial for Pochettino and Tottenham, and so they’ll be delighted to now have reassurances that Kane will be available to feature and has escaped any possible ban after the incident involving Azpilicueta.