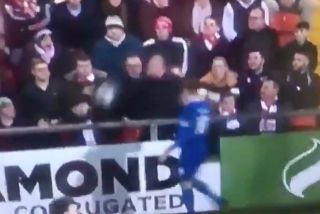 Derry City secured a 3-2 win over Waterford on Monday night, and this fan did his part to help them get over the line by wasting time.

As the ball bounced out of play and for a throw-in, the Waterford player can be seen heading across to retrieve it in order to get play back underway.

Unfortunately for him, the fan in question wasn’t so subtle with his tactics to waste time, and he flung the ball as far away as possible.

On one hand, the video below is hilarious. On the other, it can easily be argued that it’s pretty immature. Nevertheless, it helped Derry get the job done as they secured the three points and will have this supporter to thank for ruffling a few feathers along the way.