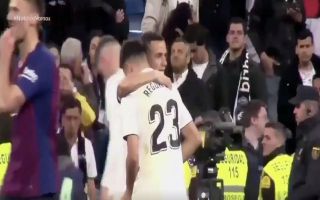 Real Madrid left-back Sergio Reguilon could not hide his disappointment after Barcelona progressed to the Copa del Rey final at their expense.

The Blaugrana secured a 3-0 win at the Santiago Bernabeu on Wednesday evening thanks to a Luis Suarez brace and an own goal from Raphael Varane, progressing through to the final 4-1 on aggregate.

Madrid earned a credible 1-1 draw in the first-leg at the Camp Nou and they were the better side during the first half in front of their own fans, with Vinicus Jr guilty of wasting a hatful of clear cut chances.

Barcelona stepped it up a gear in the second half, producing a clinical display in front of goal to oust their arch-rivals, who now only have the Champions League left to play for this season.

At the end of the match, Sergio Reguilon broke down in tears as the emotion of the occasion got the better of him, while Lucas Vazquez consoled his distraught teammate on the pitch.