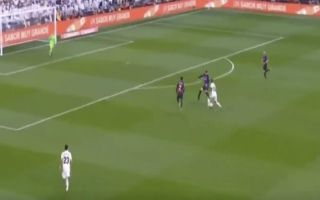 Real Madrid winger Vinicius Jr showed off his outstanding dribbling ability on a tough night against Barcelona at the Santiago Bernabeu.

The second leg of their Copa del Rey semi-final against Barca ended 3-0 on the night, with Luis Suarez grabbing a brace for the visitors before Raphael Varane scored an unfortunate own goal.

Madrid were thusly dumped out of the competition 4-1 on aggregate, but that final result could have been so different if they’d managed to convert their chances.

Vinicius Jr was guilty of missing a few opportunities during the first half of action on Wednesday night, but when trying to make amends in the second period, he showed exactly how dangerous he can be with the ball at his feet.

The Brazilian burned three Barca defenders with a dazzling run after picking up the ball in the middle of the pitch, leaving Gerard Pique for dead in the box with a superb dummy, before firing his final shot just wide of the far post.

Although he might still need to improve his final product, Vinicus Jr is one of Europe’s finest young prospects and this amazing clip highlights that fact.

Check out the 18-year-old star in full flow below, via Twitter.

Vinicius Jr has no respect to Shakira’s Hubby and the family at large. pic.twitter.com/cf9JvnBcKw

Vinicius Jr is out here balling and ending careers.. and the best is yet to come ? pic.twitter.com/xptoDZkFim