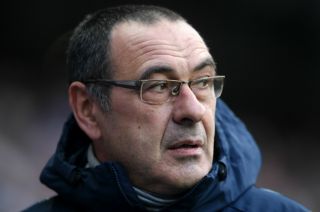 Chelsea will reportedly face competition from Juventus if they opt to pursue Zinedine Zidane to replace Maurizio Sarri this summer.

The Italian tactician has had a difficult debut season in charge at Stamford Bridge, as his side have struggled to stay on course to achieve their objectives while question marks have been raised over whether or not he can successfully implement his preferred style of play.

In turn, the next few months could be crucial in determining whether or not Sarri stays, as qualification for the Champions League is a must.

According to The Sun though, Zidane is Chelsea’s top target to replace Sarri at the end of the season, with the French icon out of work after leaving Real Madrid last year following a trophy-laden spell at the Bernabeu.

However, it won’t be simple for the Blues if they do opt to make a change on the bench, as the report adds that Juventus are also potentially set to pursue their former star as they prepare for the possible exit of Massimiliano Allegri.

Having won four Serie A titles since taking charge of the Turin giants coupled with other domestic honours, the Italian has won almost everything there is on offer multiple times.

The Champions League continues to evade him though, and that could continue as Juve trail Atletico Madrid in their last-16 tie this year.

Given the previous connection with Juve, it’s suggested by the Sun that Zidane could prefer them over Chelsea, and with that in mind, the Blues are urged to move quickly if they wish to welcome him to Stamford Bridge ahead of next season.

Time will tell if Sarri does enough in the coming weeks to silence talk of a managerial change, but Zidane seemingly could have two major offers to return to coaching next year.