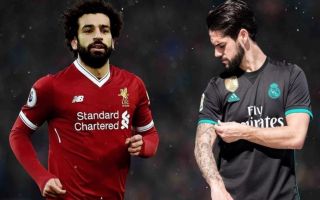 Real Madrid are reportedly weighing up the idea of using Isco as a makeweight in a deal to bring Mohamed Salah from Liverpool to the Spanish capital.

Salah has been one of the best players on the planet since his arrival at Anfield, something that seems to have caught the eye of Real Madrid if recent reports are anything to go by.

According to Don Balon, Real are considering using Isco in an offer for Salah, with it also being noted that the Egyptian international has a €220M price tag on his head.

The report also states that if Isco were to be included in a deal for Salah, it would reduce the winger’s price tag to around €120M, a bargain price for a player of Salah’s quality.

Isco has had a difficult time at Real since Santiago Solari was made manager, with the Spaniard often being left on the sidelines by the Argentine.

Real have clearly been missing Cristiano Ronaldo this season, however bringing in Salah would see Los Blancos acquiring a player who’s more than capable of filling the void left by the Portuguese international following his move to Juventus last summer.

Liverpool would be somewhat mad to let Salah go, however if they were to get Isco in return for seeing the forward leave, it may tempt the Reds into letting the former Chelsea man depart Anfield.