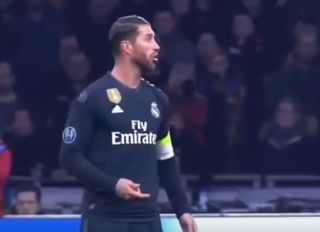 Real Madrid captain Sergio Ramos will miss the next two Champions League games for his side after being hit with a suspension from UEFA.

The defensive stalwart sparked a reaction after his side’s 2-1 win over Ajax in the first leg of their last-16 tie last month, as he admitted he purposely picked up his late booking to get his suspension out the way for the second leg.

However, as noted by BBC Sport, he later went back on that claim and insisted that it wasn’t a deliberate act, but clearly, he hasn’t sufficiently convinced UEFA.

The Spaniard has now received a two-game ban, which will see him miss the second leg against Ajax, and the first leg of the quarter-finals, should Real Madrid advance.

In all honesty, it was arguably a clever ploy by Ramos to get his booking and be available for the quarter-finals. However, he probably shouldn’t have publicly admitted to what he was doing which undoubtedly would have attracted UEFA’s attention to the matter.