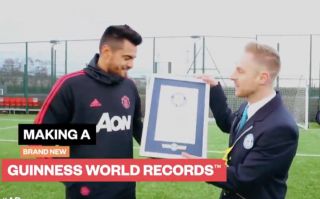 Manchester United and Argentina star Sergio Romero has set a new Guinness World Record, with the goalkeeper breaking the record for most goals scored from the half way line in one minute.

Romero has been in fine for United when called upon this season, and the shot-stopper has only gone and added to his trophy cabinet recently by setting a new world record.

As seen in the video below, Romero set a new world record for most goal scored from the half-way line in one minute, with the ‘keeper managing an impressive 20 goals.

You can check out the video below. Very impressive from the Argentine international!

Manchester United ace denies rumors of a move back to Argentina