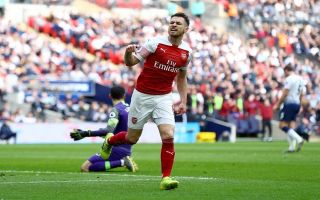 Some Tottenham fans have blasted centre-back Davinson Sanchez after his error led to Aaron Ramsey’s opener for Arsenal this afternoon.

In the 15th minute of the clash, Sanchez produced a piece of comical defending, the centre-back failed massively in his attempts to head away Arsenal’s clearance – the 22-year-old drove his header into the ground – which allowed Alexandre Lacazette to play Ramsey through on goal.

Tottenham would of been hoping to bounce back from their 2-0 defeat to Chelsea on Wednesday night but they may fall to their north London rivals on the biggest stage once again.

Arsenal defeated Tottenham 4-2 in the reverse of this fixture earlier in the season.

Here’s some reaction to Colombian’s error:

Oh dear what a shambles from Davidson Sanchez #TOTARS

wtf was Davinson Sanchez doing with his body here? pic.twitter.com/b5D95Pg8KY

Sanchez. What a dope