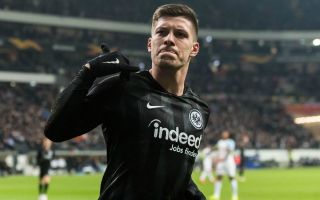 Real Madrid have reportedly been offered the chance to sign Luka Jovic, who has previously been heavily linked with a switch to Barcelona.

The 21-year-old has been in fine form this season, scoring 21 goals and providing seven assists in 31 appearances on his loan spell with Eintracht Frankfurt.

Parent club Benfica will undoubtedly have the final say on his future, but speculation is rife that he could be on the move again this summer.

As previously reported by Mundo Deportivo, it had been suggested that Barcelona had reached an agreement with the Serbian forward, thus seemingly putting them in the driving seat to land his signature at the end of the season.

It’s a necessary signing for the Catalan giants, as aside from stalwart Luis Suarez, it can be argued that they simply don’t have enough quality and depth up front in the long-term.

However, they could now be at risk of missing out on Jovic, as Marca report the talented youngster has now been offered to Real Madrid.

Man City are also specifically mentioned as an interested party, but it appears as though Madrid could now be the biggest threat to Barcelona as both Spanish giants could be eyeing a move for Jovic this summer.

To his credit, Karim Benzema has produced goals this season with 20 in 41 outings. Nevertheless, similarly to Barca and Suarez, the Frenchman will turn 32 at the end of the year, and so a long-term replacement is surely needed for him at the Bernabeu too.

Time will tell if it’s Jovic who emerges as the solution, but it seems as though he could be at the centre of a transfer battle between the two La Liga sides ahead of next season.