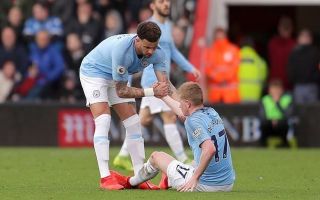 Manchester City have been dealt a blow in their race for the Premier League title this afternoon, superstar Kevin De Bruyne came off the pitch injured in the first-half.

De Bruyne was forced off with an injury during stoppage time in the first-half, today was only the seventh start that De Bruyne has made in the league this season – it’s been quite the stop-start season for the Belgian star.

Fortunately for City, De Bruyne’s replacement – Riyad Mahrez, broke the deadlock after just 10 minutes of playing time. The silver lining in De Bruyne’s latest setback could be that Mahrez can get to find his groove for the Citizens again.

According to this journalist the star dropped to the ground and clutched his leg after playing a pass:

De Bruyne gave a pass, felt something in his leg, went down and walked off.

This is by far the most challenging campaign of De Bruyne’s career:

With this injury, De Bruyne has now had the same number of injuries this season (4) as in entirety of his Man City career beforehand (8 in total since his 2015 transfer from Wolfsburg).#BOUMCI #DeBruyne #ManCity #EPL pic.twitter.com/6OkH6UvlZ5

City will reclaim the top spot from Liverpool today should they win or draw, the onus will then be on the Reds to go out and perform against Everton tomorrow afternoon.