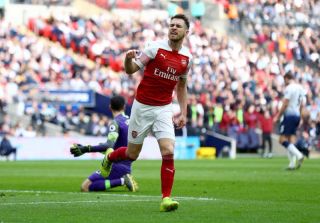 Arsenal took the lead against Tottenham in their showdown at Wembley on Saturday, with Aaron Ramsey’s cool finish opening the scoring.

The Welshman broke free of the Spurs defence and cooly rounded Hugo Lloris before finding the back of the net to break the deadlock.

It could prove to be a crucial goal to score with a win moving Arsenal to within a point of their rivals in the Premier League table.

However, it is Ramsey’s final north London derby having had his summer switch to Juventus officially confirmed by the two clubs, and he seemingly couldn’t leave without making his mark against Tottenham and at his favoured ground.

The 28-year-old has history of scoring key goals at Wembley, notably in FA Cup finals, and he continued that tradition this weekend with another great finish to give Arsenal the advantage.

Based on the reaction below, Arsenal fans were delighted with yet another decisive impact from Ramsey, although many also bemoaned the fact that he is set to leave this summer.

He deserves a great deal of credit though for continuing to be fully committed and ready to make an impact when called upon by Unai Emery, with the Spaniard’s decision to start him rewarded with this key contribution.

announce ramsey to juve was a joke

Guy own that stadium and team